Invasion of the Body Snatchers

This is a video of a real service. Is it God, Satan, or just plain crazy.

Now I'm all for happiness and a uplifting my spirit, but this is over the top and is just plain crazy. This is the power religion has over people, I say it's more like invasion of the body snatchers. These people are acting possessed! I reminds me of shaman that goes into a trance to ward off evil spirits.

What a great way to keep people completely insane, this way they are totally blinded to what's really going on around them. I would imagine after they go through something like this, it end's up staying with them all week long. In god we trust? How about, in crazy we trust. These phony ministers should be arrested for fraud and deranging the minds of people. This is truly dumming down America, keeping people stupid so they do what their told and believe anything they hear as long as gods behind it. God is behind all of our major news networks because were a christian Nation, right? I mean it's on our dam money for crying out loud. That's why these people who most likely aren't very rich, but are conservative republicans buying into the elite messages. These are the same people that put Bush in the White House, keep guns in their home (which end up on the street) and of-course praise Jesus, at least they think they are. 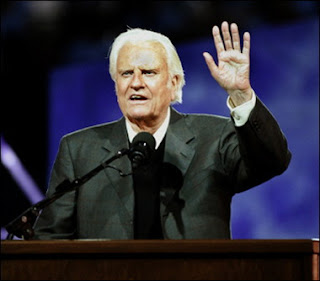 How the hell did that happen! Isn't it harder for a rich man to enter the gates of Heaven then it is for a camel to pass through the eye of a needle. Good luck Billy Graham. I wonder if Jesus owned gun's or if he's planning to buy some upon on his return??

It's 2009 not 1009, let's get civil people and attain the minds we need to move forward into the next era. This religious stuff is not helping, it's only regressing us as a human race. Believe in yourself, not people that blab gibberish claiming it's the language of god coming through them. Truly astonishing what some people decide to believe.
Email ThisBlogThis!Share to TwitterShare to FacebookShare to Pinterest
Newer Post Older Post Home