Google moon is finally up and running, but still the details are not very good. The contrast is super high when looking at any of the major creators so it's truly imposable to make out any real details. With all of today's technology we still do not have any way of getting close detailed images of the moons surface. When you zoom in there are still some questionable area's all over the surface. For example, the Tycho crater is one that is thought to have alien structures in and around it. When you look at it in Google moon all of the details are lost and actually and has been blurred on the sides where it's thought to have mining roads. Whats interesting is when you zoom in as far as it will allow, the 3 mile wide 7,000 foot tall structure in the middle of this crater has some strange spots on it. You can still find some interesting area's but no clear detail's of the surface. One thing I do like about the new Google moon is that they have a good stock of photo's from the Apollo missions. Take a look at picture 22 from the Apollo 17 landing site there are obvious spots where it has been doctored with an air brush. Maybe this was to piece together the photo so it could be a panoramic picture. Or maybe there's something there they don't want you to see. NASA has also stated that there is really no color on the moon, but in picture 13 from Apollo 17 they have a picture of orange soil. I'm sure this is not the only spot were orange soil is found. There is actually many different colors on the moon and one question I have is, why would the take some black and white photo's and some color if there's not much color to begin with? Decide for yourself, and and attain the knowledge you feel is the truth. Come to your own conclusions but only after you allow your mind to be open to what could be. The truth is what you allow it to be, attain you attainable mind. 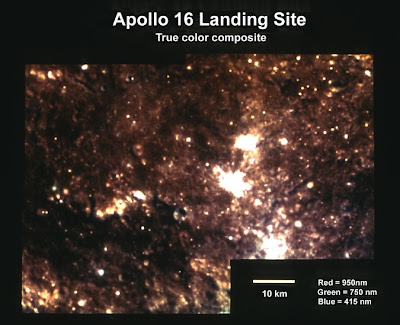 This photo is the real true colors of the Apollo 16 site. Not very gray is it. 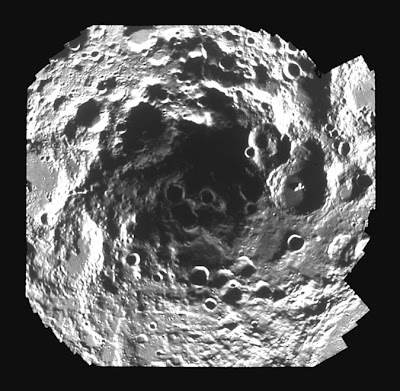 This is picture of the south pole of the moon from the Clementine mission in 94'. Notice anything strange in one of the craters on the right. What ever it is, it's huge. Miles wide, miles high and it's very oddly shaped.
Email ThisBlogThis!Share to TwitterShare to FacebookShare to Pinterest
Newer Post Older Post Home