Ancient Aliens in Peru and Iraq 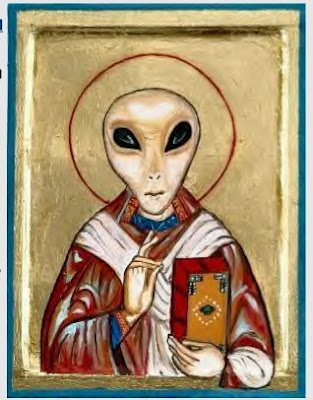 It's truly stunning to see all of the evidence supporting the realization that aliens have been visiting our planet for a long long time. I've talked before about how every religion mentions people from the sky. Well not only do all of the ancient teachings mention them, but almost every culture on the planet has left something behind showing evidence that their people were effected by beings from the sky. Some argue that it's the sun and weather patterns that these ancient civilizations were worshiping. I agree that some civilizations and ancient cultures worshiped the sun and god's that could not be seen, and for them it was more in the minds of their people rather than actual contact from beings from another planet. But some of these images that have been left behind only point to one conclusion, and that's that beings have been here before and have made contact with people in the past. Lets take a look at some of the evidence depicting true alien contact from opposite sides the world.

First lets go to the desert of Nazca in Peru. This is home to the largest geoglyphs ever made on planet earth. The big question is why are these images so large, for it's imposable to make them out on the ground, and how did were they able to make the lines so perfect without having an areal view. Here is a two maps of the area around Nasca show the positions of the images. 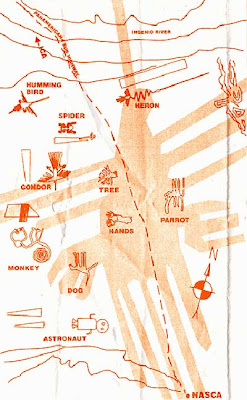 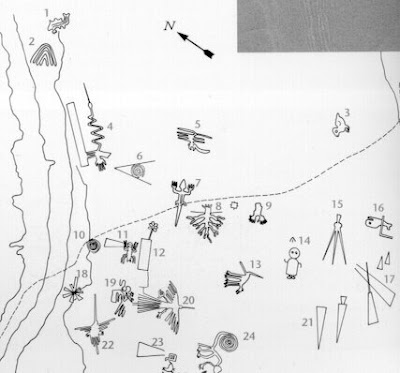 All of these images are very impressive and there are hundreds of feet long, but what I find to be the most amazing are the strait lines that go on for miles. In a recent study it was discovered that the lines were made a few hundred years after the figure images were made. There are many theories to how and why they were made. What I find the most compelling is the fact these lines and images follow what is called Archaeocryptography or better known as "The Code". This is the same arithmetical law which 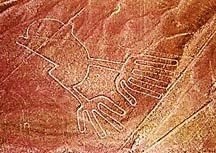 is found in other ancient

structures around the would such as the pyramids of Egypt, the pyramids of Teotihuacon Mexico, the key hole structures of Japan, Stone Henge and so on. The beings who were the architects of these structures and images knew about global positioning. The image of Manos is thought to be a figure of a man praying, though this is not the case. This figure is showing the explanation of his latitude and longitude. The mathematical equation is explained here .

Now explore for yourself at these incredible lines, there are tons of them. I seem to find new ones every time I look, maybe that's because they span over 800 miles. There are also found in other coastal areas such as Zana, Santa, the Sechin Valleys, Pampa, Canto Grande, the Sihuas Valleys, and in northern Chile. Zoom in and follow them to see were the go. Truly amazing!


Now let's head over to Sumeria, which is where today stands modern day Iraq. The bible mentions the Sumerian's as the "Shinar". The Sumerian's lived at around 4000BC and invented writing in about 3200BC and the language died out at about 2000BC. These Sumerian's were

the first true civilized people to roam the planet. According to renowned historian, Hebrew scholar, author, speaker and archaeologist Zecharir Sitchin their ancient text states how they were thought by the Anunnaki which was a race of human-like aliens from the planet Nibiru. According to the theories of Sumerian cosmology Nibiru was the twelfth in our solar system including the sun and our moon with an orbit around our sun approximately ever 3600 years. It was also written that one of Nibiru's satellites had a catastrophic collision with Tiamat, a planet that was between Mars and Jupiter, and this how the Earth are moon and the asteroid belt was formed. The translations by Stichin also suggest the Anunnaki came here in search of gold partials for the reflective properties to be placed in the failing atmosphere of Nibiru. Now sense they needed a

superior race of humans to communicate with and who could learn from them, the Anunnaki took 80% of human DNA and 20% of their own to make a perfect human specimen called "the Adam". The Sumerians depicted their creator with snakes in a double helix, formed with thin bars connecting between them in a spiral fashion. Interesting to know that only recently scientist have discovered our human DNA has a double-helix nature to it. Here are some the carvings and aretifacts depicting the Anunnuaki. 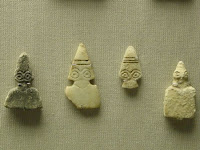 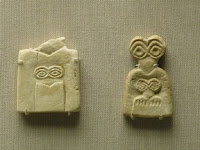 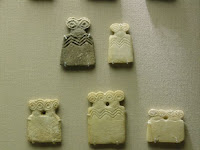 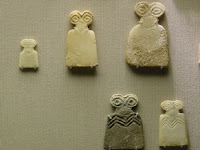 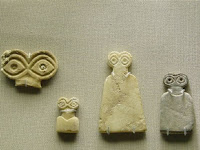 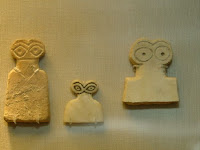 Interesting never the less, the story of the Sumerians goes much deeper than this and I have mention then in some older posts.

Do your own research to find the truth in order to attain the knowledge you need to set your mind free of conventional thinking. Attain your attainable mind.
Email ThisBlogThis!Share to TwitterShare to FacebookShare to Pinterest
Newer Post Older Post Home