Scientific Proof Crop Circles are NOT Man Made 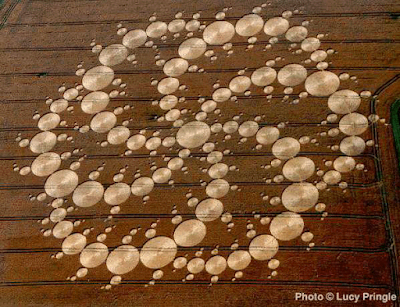 This is a movie put out by Nuo Viso Productions going into the scientific facts laying behind the phenomenon of crop circles. So far I feel this is the best documentary on crop circles. These scientists are really starting to put the pieces together in a way that really makes sense. If you have any doubts about these amazing patterns and how their made, then you absolutely must watch this movie. The most interesting correlation I found when watching this documentary was the fact that the majority of these crop circles are made in the area of Avebury England. This is the same area where the land markings are in direct alignment with Cydonia on Mars. Cydonia is the a land mass on Mars where

it is believed to have pyramids and alien structures. Avebury also is the home to the largest known stone ring in the world. Older than than Stonehenge (anywhere from 4000-7000 B.C.), the multiple rings of Avebury are full of mystery. Archaeologists have only begun to unravel their true meaning. Avebury is considered as one, if not the most sacred place on earth. Interesting that this is the biggest hot spot for crop circles.

It's too easy to write crop circles off as human made. Not for a second do I believe that all crop circles are made by something other than a human. There are lots of human made crop circles, but it's the ones that have scientific oddity's that really make you think. The scientific proof from these formations prove that there is no way that the crop circles in question where made from human hands. In fact it proves that they were made from some sort of electromagnetic microwave, forces from technology that far surpass are own here on earth. Open your mind to the messages that are being sent to us from another world, these complex patterns revile keys that will unlock doors to our future. Attain the knowledge that's being shown to you and think out side the box in order to for fill your life with greatness to help rise into a higher state of contentiousness. Attain you attainable mind.

Here's at great site on the scientific research being done with the mountain of evidence they have acquired.
Email ThisBlogThis!Share to TwitterShare to FacebookShare to Pinterest
Newer Post Older Post Home