I was surfing the net and came across this video and thought I should pass it along. These people are protesting against Obama's health plan in Washington D.C. on 9/12/09. This is what Fox didn't show you. Talk about a group of complete idiots who have know idea about anything that goes on in the world, much less the United States. It's people like this that make American's look bad to the rest of the world not to mention the republican party. I mean, just plain stupid. It's almost hard to watch. Enjoy.

It's funny how when the health care system sucks and everyone 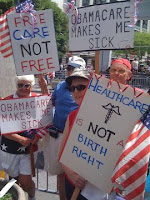 expresses how desperately bad we need affordable health care as a country. Obama, who is up to the challenge and making it happen all of a sudden becomes a Nazi taking away our freedoms. Everyone is so mad about him spending money on the health care for the American people, claiming how he selling the future of our children. Our country has more medical bills per-household than almost the rest of the world combined!! What about the $909,743,444,187 currently spent on the war in Iraq!! Yes that twelve digits. Yes that's in the trillions. The Iraq war costs about $177 million a DAY. Obama's plan, 55 million in a year. That's right, stop the war for about 8 hours a year and it's paid for. Health,....I guess that's a worthy cause?

How completely ignorant can any one group possibly be???

rapid. Just goes to show what the mainstream media can do. This is a prime example of how distorted the republican mind can get. They actually think that with a "right" government they would be holding on to their freedoms, when in reality it's been the "right" that's been taking them away one by one. What about homeland security?? Do you think any of these dumb-asses even know what they do? It's people like this who are easily trained to believe what ever their told. Notice the little girl holding up the Fox News sign stating how it's "America's only non-corrupt on-air media". Could people become any more ignorant?? 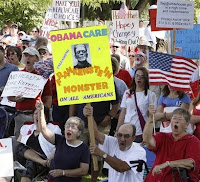 It's amazes how many people actually will go out and protest against something they know absolutely nothing about. It's as if there were in the check out line and saw the cover of Enquirer that read "Obama is Hitler reincarnated" made a picket sign and ran to the capitol. It would be nice to round up these idiots and drop them off in North Korea so they could experience what a real communist state One-Man Dictatorship is like. All these stupid redneck-hillbilly's can't tell apart shit from Shinola and should be put in idiot camps. Go Oboma go, lock the ignoramuses down and make America a better place. I'm all for it!! At least we wouldn't get another Bush in the white house.

These people remind me of a joke;

Q:How do you know the "Tooth Brush" was named in the south?

A:Because anywhere ell's it would have been named a "Teeth brush"

Come on people,... attain some real knowledge and live your life how it should be lived. OUTSIDE THE BOX!
Email ThisBlogThis!Share to TwitterShare to FacebookShare to Pinterest
Newer Post Older Post Home