The 9/11 Conspiracy: Part two - The Pentagon 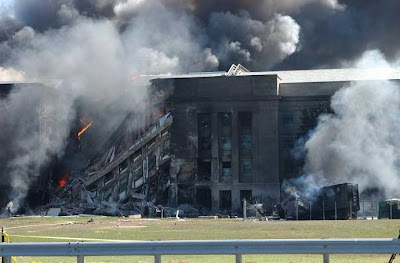 The Pentagon was supposedly hit by a Boeing 757 on the morning of 9/11. This one really isn't hard to figure out, all you have to do is take a close look at the evidence. I going to show you how there is no possible way that a Boeing 757 hit the Pentagon. 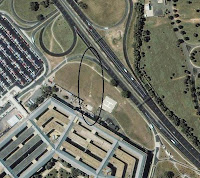 
You can clearly see the white markings on the ground in the picture on the left taken four days before hand. Then look how quickly everything was covered up. This way it would be imposable for anyone to analyze any kind of markings or evidence.

-The reinforcements built in the exact spot where the plane hit.
Whats the deal with the pentagon making reinforcements within months of it being hit. New steel beams were put in place for reinforcements in that area. Why? Was just that side of the building getting old?? I guess. These reinforcements save thousands of peoples lives who were working in proximity of the explosion. 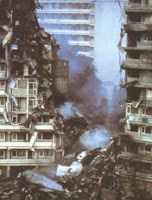 the reinforced concrete walls, that's why the hole is the size it is. OK, if the walls knocked off the wings and tail wing, what happened to them? Did they just disintegrate into thin air? Do you really believe that they just melted into nothing, or blew up into so many pieces that it might as well of been confetti. Come on, really?? Do you believe in magic too?? Sure I'm a fan of Chris Angle, but I don't think he was there that day, nor was David Copperfield. No matter how you look at it the markings on the Pentagon do not coincide with being hit by a Boeing 757. This picture on the felt is what a building looks like after being hit by a 757. Notice the big metal wing at the bottom? For that matter notice the big plane parts everywhere? You should remember that big chunks of metal and planes just don't blow up into millions of tiny pieces.
Here's a video of a real plane crash with a plane about the size of a 757. Notice the huge chucks of plane. Granted it didn't hit a building going 400mph but there would still be bigger pieces of plane then what was found. These are pictures from some the the worst aviation crashes ever. 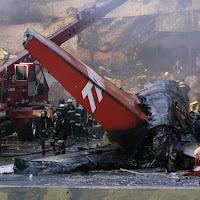 Debris is the number one piece of evidence any in any type of crash investigation. So convenient almost none was found. The pieces that were, could have easy come from a smaller craft, doctored to look like it came from a 757. Like the hub caps they found. That's the oldest mafia trick in the book. To fake a death you put someone ell's teeth in with the body, or some other body part and burn the rest beyond recognition. Either way the amount of evidence from the crash in so minimal, it's very hard to believe that this huge commercial airline slammed into the side of a building ripping off the rudder and wings leaving almost no trace what so ever of ANY part of the plane??? No way, I'm not buying it.

-The only two videos ever released to the public.
The strangest thing about the whole video ordeal is that within minutes, every video camera recording in the area from gas stations, hotels, and business buildings all were confiscated by government officials. Why? Every other video that has ever caught any kind of catastrophe on tape as been shown from every angle from which it was covered. Why were the tapes taken? Because of the sensitive information caught on video that's why. They show exactly what happened in real time. Compared to the official video that was released only plays at about one frame per second and you really can't see anything at all. Skeptics say they don't show the other videos because they wanted to protect the family of the dead. How many time's did they show the planes ramming into the towers and people jumping to their death from the burning towers? I can't even count. The numbers just don't add up. Take a look at this video for yourself. The maker of this video has taking the liberty to slow it down and point out the object has it enters the frame in the first video, but the fact that the security camera for the PENTAGON only takes about one frame per second you really can't make anything out. Maybe the government can't afford real time cameras. Bull Shit!

-The other hole
This for me seals the deal. Just look at this picture and tell me how a plane made this hole. It's funny how in the case of the twin towers, the explanation for the free-fall collapse is all based on video and pictures. In the case of the pentagon, it's all base on evidence and investigations so they say. They try to explain how this hole was made with the nose of the plane. Maybe it's just me, but I just don't get it. See for yourself. One other thing, why don't they have pictures of the other holes it would have made. 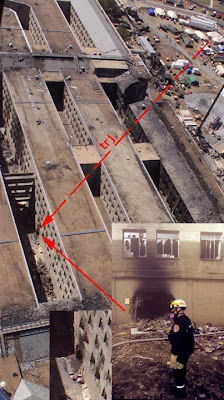 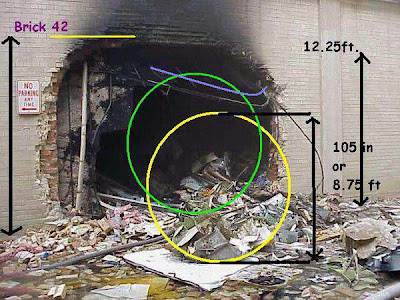 Think this picture is doctored? Well here is the official projected line put out by the 9/11 commission. 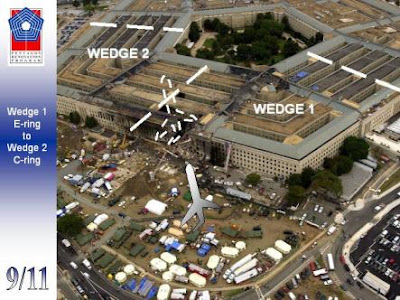 Now compare the two. No way no how!

I agree that a picture is worth a thousand words. According to the upper picture it would have been imposable for that hole to have been formed the nose of a plane. It would have had to zigzag through the hallways, found it's way to that part of the building , turn strait to make a perfect hole almost the same size as the original entry point made in the first place. It would of also made other holes in the building that are not there. Come on, really people!!!

Something ell's that's quite fishy, is the fact that near this 2nd hole is where they found one of the rims to the wheels. Or was it just put there for the picture. Also notice all of the black smoke on the left-wing of the building in this picture and that the whole right-wing is completely chard. No black smoke came from the middle-wing or wedges. And almost no damage to wedge 1. Why? Were these parts of the building sealed off?? Here's a final view from above. Look at how quickly it's was all covered up! Amazing what they get away with. 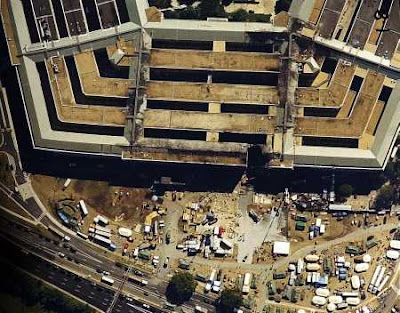 It's a mystery all together, learn the facts for yourself, seek the truth and attain you attainable mind.
Email ThisBlogThis!Share to TwitterShare to FacebookShare to Pinterest
Newer Post Older Post Home