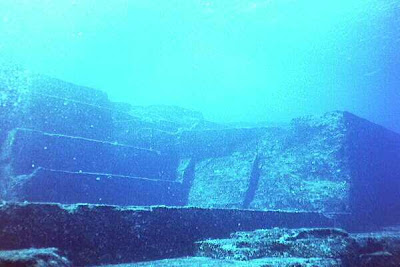 City's that were engulfed by water has only been some what of a myth until now. Due to the advancements in emergent technological innovations, we have been able to map detailed images of ocean floors and deep lakes. There have been more underwater discovery's of ancient dwellings over the least ten years, then there has been in all of history. These underwater discovery's are literally changing history as we know it.

Of the Gulf of Cambay and 120 feet (36 meters) under the water lies ruins of a city.

Passably dating back to 7500BC predating the Sumerian period by 2500 years. This was discovery was made while doing a routine assessment of water pollution levels. Strangely enough the structures resemble known characteristics of civilization back in 2500BC 5000 years later. One of the structures is the size of an Olympic swimming pool and has a series of sunken steps that look like the Great Bath of Mohenjo-daro. Another rectangular platform that's 200m long and 45m

wide is as big as the Acropolis in Harappa. So far they have found over 2000 thousand objects from this site such as hand-chiseled and polished stone tools, perforated stone pieces, ornaments and figurines, semi-precious stones, weathered potsherds, ivory, fossilized remains of a human vertebra, a jaw bone and a human tooth. Carbon-dating of pieces of wood carried out by the Birbal Sahani Institute of Palaeobotony and the National Geophysical Research Institute concluded that they were from around 5500 BC and 7500 BC. It's these artifacts that are going to change history forever. As of now is was thought that the earliest civilized culture was the Sumerians dating back the 5000BC. History is changing because our knowledge of it is changing. 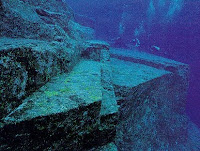 Now over to Japan's mysterious under water pyramids that were discovered back in 1985 by a sport diver who unintentionally strayed beyond the standard safety perimeter near the south shore of Okinawa. The construction of these structures are very similar to Inca cities completely on the other

side of the ocean.

It's thought that this city sank after an earth quake around 2000BC and that the city is around 5000BC to even 11,000BC. Predating everything we have ever known about civilization. Other experts believe that the structures could be all that's left of "Mu" which is a fabled Pacific civilization thought to have vanished after a massive tsunami. The largest structure is a complicated, monolithic, stepped pyramid rising 82 feet (25

meters). What I find so amazing about 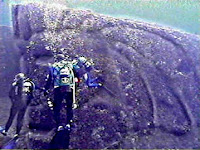 these underwater structures is that it has been written off as natural formations and there for does not have any historic relevance to the Japanese government. Here's the thing, not only are these large cut out stones but a giant carved head approximately 15 feet high (5 meters). Explain that one skeptic! You can't because you know what it is, and it's changing history books and many peoples beliefs .

In the waters of Cabo de San Antonio, off Cuba's coast researchers are discovering unusual formations of smooth blocks, crests, and geometric shapes about 2000 feet underwater. These formations suggest that they could be the buildings and monuments of an early, unknown American civilization stated by Advanced Digital Communications. "These are extremely peculiar structures, and they have captured our imagination," said Iturralde, who is director of research at Cuba's Natural History Museum.

Iturralde has studied underwater formations for years and also said, "If I had to explain this geologically, I would have a hard time." It would also explain the ancient stories of an island inhabited by Maya and native Yucatecos ancestors that vanished beneath the waves. Archaeological and inscriptional evidence of sites on land near the shore indicate a possible date of construction of these structures are between the year 500 and 700. Until further studies are done on this site no one will ever know. 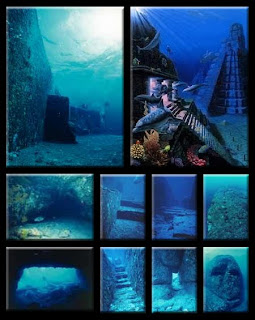 These are only a few of the well known unexplained underwater ruins. Is it Atlantis? Some think so and some do not, I don't feel it matters either way. What I feel that matters is the fact that these are city's that have been swallowed up by the ocean and two predate any city dwellings history has ever known. These underwater ruins are changing our history as we know it. Why their not taken seriously mystifies me. You would think that scientist and historians would all over these ruins, but for some reason there are written off as geological anomaly's or just not seen as having any significant historical importance. It's important to ask ourselves what make's something historically significant. I figure an 8000 year old city might be a bit significant, don't you? The truth is out these but in many way is suppressed, why? Because in order to change history as we know it cost money, and who wants to spend money on something that's already happened? Besides, people might then also have to change their beliefs. Attain the knowledge that could change how you think, free your mind by understanding what's out there, don't get caught up in the out dated history books by attaining you attainable mind.
Email ThisBlogThis!Share to TwitterShare to FacebookShare to Pinterest
Newer Post Older Post Home