15 Billion of US Tax Payer Dollars Unaccounted for in Iraq 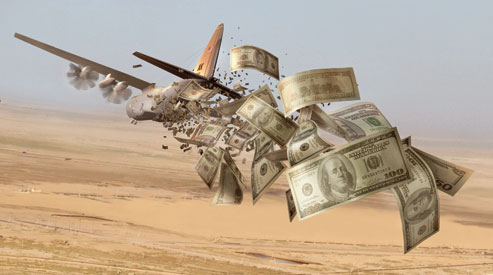 How could the US government just loose track of 15 billion dollars?  The explanation is that most of the money was likely spent in the right place, it's just that the money changed so many hands that it had become to difficult to track since there was no group assigned to oversee the transactions.

8.2 billion of these funds were supposed to be used for the purchases of weapons, vehicles, construction equipment and security services and only 5 million of the dollars spent was accounted for.  That's a 95% failure rate in basic accounting standards! 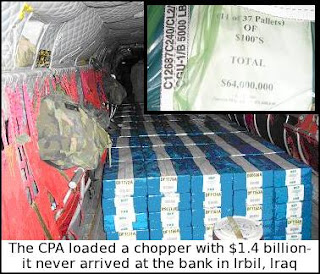 "We estimated that the army made 1.4 billion dollars in commercial payments that lacked the minimum documentation for a valid payment, such as properly prepared receiving reports, invoices, and certified vouchers. We also estimated that the army made an additional 6.3 billion dollars of commercial payments that met the 27 criteria for payments but did not comply with other statutory and regulatory requirements." Deputy Inspector General Mary Ugone told a Congressional committee July 22 2010.

Congressman Henry Waxman, chairman of the House Committee on Oversight and Government Reform found that the Pentagon was also guilty of giving away another 1.8 billion in Iraqi assets "with absolutely no accountability."

"Investigators examined 53 payment vouchers and couldn't find even one that adequately explained where the money went."

According to the inspector general's report in November 2007 (when Bush was in office) another 5 billion that was to support Iraqi security forces can not be properly traced.  HMMM

"Taken together, the inspector general found that the Defense Department did not properly account for almost 15 billion dollars." 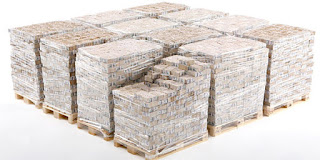 "In one remarkable instance, a 320-million-dollar payment in cash was handed over with little more than a signature in exchange."" said Waxman referring to the check signed by Jack Gardner who in July 2003 authorized that amount to be transferred to the Iraqi Ministry of Finance for the payment of Iraqi salaries. There are no records of the transfer accept Mr. Gardner's signature .

Out of the examined 53 payment invoices, not one made a note of the money’s ultimate destination according to the Pentagons inspector general. 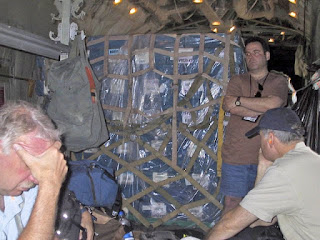 As of now, Pentagon auditors have referred 28 cases to criminal investigators.  What does this tell you?  The Pentagon has referred dozens of cases to criminal investigators on it's own people.  Think about it, people working in the Pentagon are accusing their co-workers of criminal actions.  I would imagine the people who are getting away with these criminal actions (unaccounted billions of Tax Payer dollars) have an extremely  high security clearance.  The highest actually, how else would they be able to get away with stealing billions of dollars.


Now of-course many people are trying to put the blaim Obama, saying that it's his fault he never put a commit together to over see the transactions.  None of this holds any ground though because all of the money was spent by 2007, a year before Obama was elected.

Let's take a look at all the parties involved who might have received these funds. 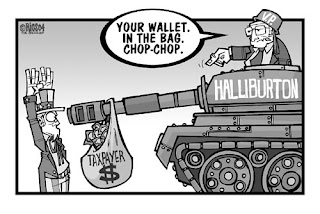 *More than $25,000 for any field of operation. Source: Department of Defense 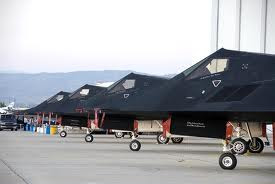 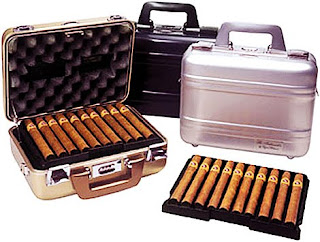 How do you like the steal cigar cases made by Halliburton.

Blackwater or Xe is a privately held company and does not publish much information about internal affairs including money exchanges.  In June 2010, it was reported that the company was being put up for sale, and that Erik Prince (Founder and former CEO) may be planning to move to the United Arab Emirates. The Nation magazine story said that if the move happened, would make it difficult for the US to extradite Prince if he were to face US criminal charges for his firm's past dealings with the US government. The UAE and US do not have an extradition treaty.  Price was an intern in George H. W. Bush's White House and is a major financial supporter of Republican Party causes and candidates. Give him a little and get a little back.  In November 2008, the U.S. State Department prepared to issue a multi-million-dollar fine to Blackwater for shipping hundreds of automatic firearms to Iraq without the necessary permits and without paying the proper tariffs. Some of the weapons were believed to have ended up on the country’s black market.  You like that wording though "prepared to issue" they may have "prepared" it but there are no reports stating they actually payed that fine.

"Because of the urgency of the war, a lot of these contracts have been subject to less scrutiny,"says William Hartung, who tracks defense spending for the New America Foundation.  Another problem is that the war has been funded outside of the regular defense budget process. Instead, it gets funded through "emergency" spending bills called supplementals, which offer much less detail and get less scrutiny on Capitol Hill.
Hartung believes we've only seen the tip of the iceberg in allegations of fraud and corruption related to Iraq war spending. "Congress is starting to look into it, but it has not yet gotten down to specific questions," says Hartung.  And this was back in 2007. 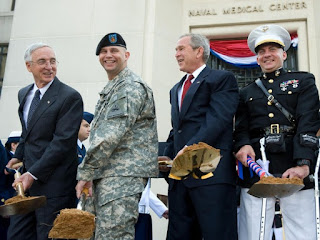 Now in 2010 we have the Pentagon auditors saying there's about 15 billion dollars unaccounted for.  I believe these to be large bonuses and private pay offs.  Someone is sticking their hand in the cookie jar and it's coming directly out of American tax payers pockets.

I think it's funny how so many conservatives are so anti-tax but yet it's these same conservatives who are pro-war.  You see, it's a total mind f%ck on the American people.  We are made to think that war protects our freedoms, and rather than american tax money going towards, clean energy, education, improving roads and highways, the infrastructure of city's parks, down town areas,  bike paths,  ect.... instead, all of this money goes to a war thousands of miles away started by an insane administration who's friends and allies are the CEO's and administrators of the company's listed above who have all made tons money over the last ten years. 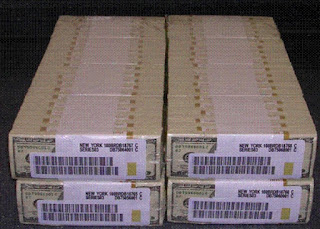 Rather than freedom, we get Homeland Security.  Rather than a better American infrastructure, we get ripped off right in front of our faces by people who "can't be touched", claiming to protect Americans.  I'm so sure they care so much.

The Bush administration had there plan all laid out.  Start a ten year war that can't be stopped so the next administration will get the blame.  Make billions of dollars for themselves and their friends in the business.  Money=Power, not a hard equation.  Then do it all under the name of freedom so no one would question how much or where the money would be spent.  What is the price of freedom?  That's just the question they wanted everyone to ask because they already knew your answer which is, there is no price on freedom. It was and is this kind of thinking that aloud this to happen. 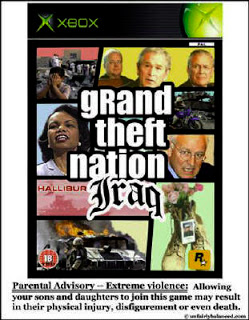 Billions of dollars have been made and billions of dollars have been lost, all by the Bush administration, not Obama's.  Conspiracy theory you say?  Think again.  These people who are responsible for the war, the money, the loss of life, the contracts, the business of war are all millionaires if not billionaires.  WAR = BUSINESS = MONEY = POWER = CONTROL.   Open you're eye's and you're mind as you attain your attainable mind.