Evidence has been found that the conception of flying machines date back to about 3000 BC. But how could this be? Know one has found any evidence of any actual flying machine. No parts, no gears, nothing. All we have are the Sanskrit epics (the basis for Hindu scripture), the pre-Colombian golden flying figurines, a few hieroglyphics and of-course dozens of medieval paintings that depict some type of flying machine.

Lets first take a look at the pre-Colombian golden airplane sculptures that date back to about 800AD. 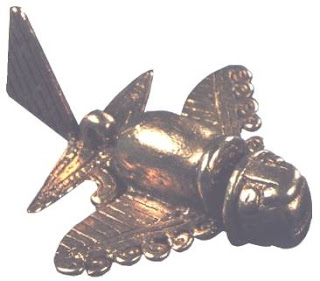 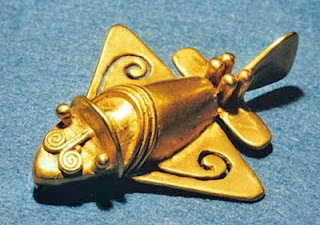 These sculptures show very distinctively a pair of wings, a horizontal Stabilizer, a vertical stabilizer and a cockpit that is somewhat separated from the main body of the craft.


Some people argue that these are simply sculptures that represent birds which the people of that time saw as god like birds and made these golden sculptures to honor them.


To me this scenario makes some sense considering that they did make all sorts of sculptures.

Here we have a bird attacking a man, but the bird is very obviously a bird. Legs, claws, a beak, eye's, all the major parts that make up a bird. 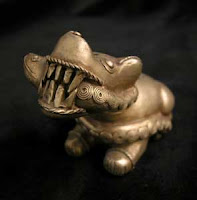 Here we have a Jaguar fighting off a snake that's coiled around him. Notice all the details, the teeth, the lips of the Jaguar, the tip of the nose, the ridge of the ears. My point is that the makers of these sculptures were very detail oriented. 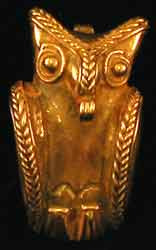 Here's is what is very obviously an owl. Just like all the sculptures above these were all made around the same time 800-900 AD. I find it extremely interesting that all of the golden sculptures take very close form to what they are representing, just meaning that their not very abstract. But when we look at the sculptures in question, there was nothing even close on the planet that resembled them at the time.

If they were depicting birds, then why are they so abstract. As we can see from the other sculptures, they didn't seem to veer to far from what ever it was they were sculpting. 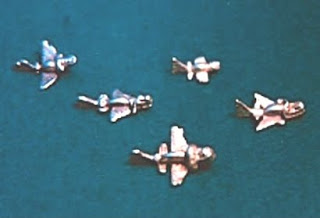 So why do the tails of these so called "birds" have Horizontal and Vertical Stabilizers? Why do that wings come from it's belly? Where are the legs and claws? What about eye's, a nose or a beak? Why are they such a far cry from what any bird of the time looked like?

So as you can see there is a great interest it these sculptures to what they truly represent. The picture your looking at on the right is of a man who made an exact replica of one of these sculptures. Not only did it fly, but flew effortlessly, hardly taking any thrust to get it into the air and was extremely maneuverable. All who were involved were simply amazed.

Fast forward to 7:28 on the video below to see the footage.


Now lets move on to the "Vimanas" which are the flying machines described in the ancient Indian Sanskrit epics which are a series of ancient historical writings much larger then Bible that make the construct of Hinduism. It occurs in the Sanskrit epics Yajurveda, the Ramayana, the Mahabharata, the Bhagavata Purana, as well as in classical Indian literature. These texts describe the size and the mechanical workings of the various flying machines. They explain how they where controlled, special precautions that had to be taken on long flights, how the machines could be protected against violent storms and lightning, how to make a forced landing and even how to switch to solar energy while in flight. Yea, and were talking thousands of years ago. Something that's very interesting is the fact that the only translations that could not be translated were the descriptions of the various metals and alloys that were used. There's lots of technical detail about the different metals, heat-absorbing metals, their melting point and the type of propulsion units that were used. There are 16 kinds of heat-absorbing metals with names like ushnambhara, ushnapaa and raajaamlatrit non of which can be translated into English.

A book written by David W .Davenport, an Englishman born in India claimed to have proof that Mohenjo Daro, which is more than 5000 years old, was destroyed by an atomic bomb of some sorts. In his book "Atomic Destruction 2000. BC" Davenport demonstrates that there were three different degrees of devastation which spread from the center outwards. Some type of enormous heat was unleashed at the center which created total destruction. Thousands of christened black stones found by archaeologists, turned out to be fragments of clay vessels which had melted into each other due to extreme heat. The possibility of volcanic eruption is not possible because there is no evidence of hardened lava or volcanic ash. Davenport assumed that the brief intensive heat reached approximately 3632 degrees F (2000 C). He also states that there were numerous skeletons of people lying flat on the ground, often found hand in hand as if they had suddenly been overcome by an unexpected catastrophe.

Lets take a look at some of these Vimanas. Don't forget to click on them to enlarge. 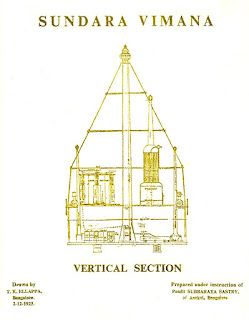 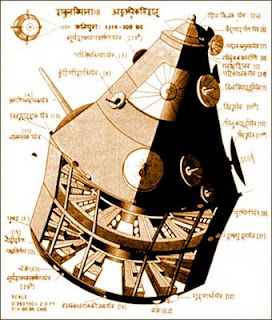 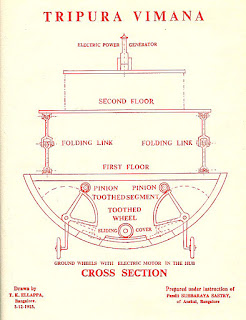 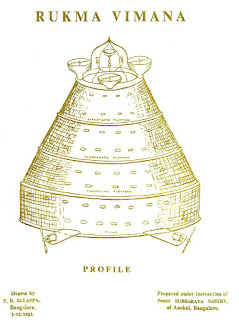 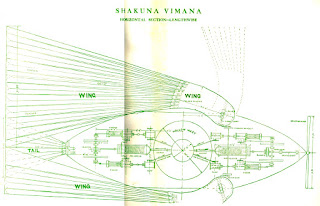 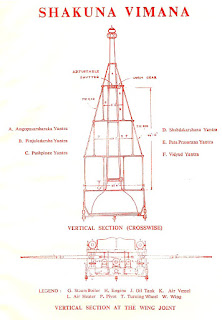 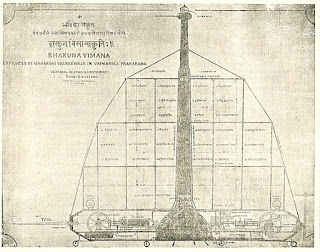 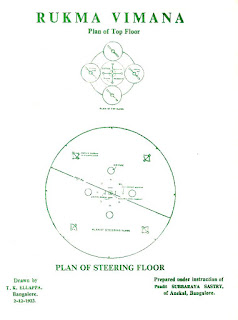 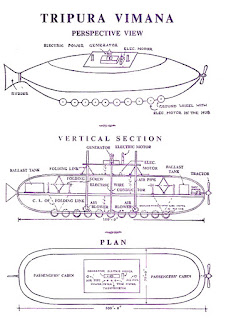 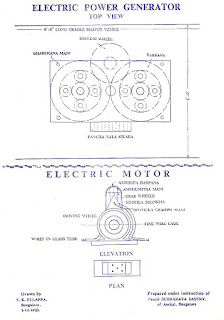 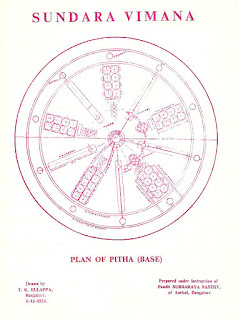 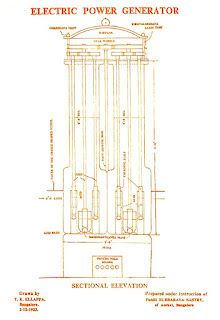 All of these drawings were done in 1923 by a engineering draughtsman T.K. Ellappa, except for of-course the one below. 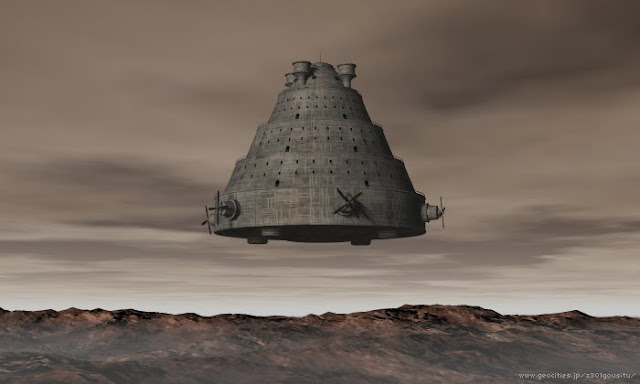 What I have shown you here only touches the surface of Vimanas. There is tons of material about them.

Now we move on to Egypt but only for a moment.

These hieroglyphics speak for them selves and are 3000 years old located on the ceiling beams in the old New Kingdom Temple, located several hundred miles south of Cairo and the Giza Plateau in Abydos.

Some scholars say these shapes were caused because hieroglyphics would get added on to or written over in time which caused the odd shapes. So in other words, a mistake. But that's for you to decide.

And lastly, lets quickly touch on ancient flying machines in medieval paintings. This is just one of many.

This is one of my favorites. Could it be any clearer?? If you want to see more go to my post "Alien's and UFO's in medieval art".