Not contrails but CHEMtrails. 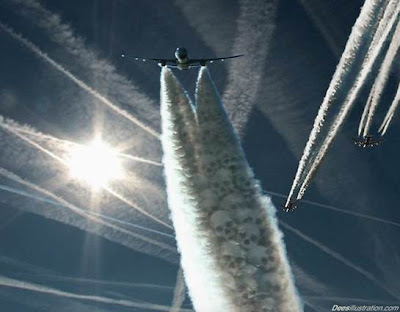 This debate over the spraying of chemicals over major populated areas has been going on for quite some time. The main reason I decided to write about this today is because I could not help but to look up and see chemtrails covering the sky. It's interesting how some days there are none, and other days the sky is covered. I realize the temperature, humidity and wind speed play a factor but some days I'll see multiple planes at about the same altitude that look about the same size, flying at the same time and one leaves a long trail that goes all the way across the sky and the other as a normal length trail maybe only 50 meters at the longest.
Some facts about CONtrails; CONtrails are made up of particles of crystallized water vapor, also known as ice that condense around the aircraft's exhaust. Depending on the atmospheric conditions as well as the strength of the winds will depend on how long a contrail will stay in the sky. Now if the contrail is formed where the atmosphere is dry, it may dissipate rapidly. If the atmosphere is near saturation, it can stay up there for a hours. They will also sometimes blend in with other clouds.

It would seem all planes give off some sort of trail. These don't.

This by itself has given great concern to climatologists due to the fact that cloud cover in highly traveled areas (like the United States) has increased by approximately 20%. I wonder if this effects the weather just by it's self? Gee,... you think! Now this is where it starts to get heavy. Ever heard of the High Frequency Active Auroral Research Program known as HAARP. This is an investigation project to "understand, simulate and control ionospheric processes that might alter the performance of communication and surveillance systems" So hold on here, simulate and control ionospheric processes! 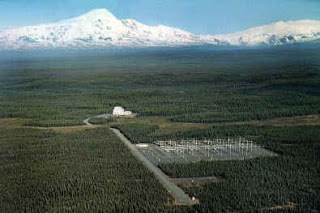 Wikipedia: The ionosphere is the uppermost part of the atmosphere, distinguished because it is ionized by solar radiation. It plays an important part in atmospheric electricity and forms the inner edge of the magnetosphere. It has practical importance because, among other functions, it influences radio propagation to distant places on the Earth. It is located in the Thermosphere.

The fact that the ionosphere 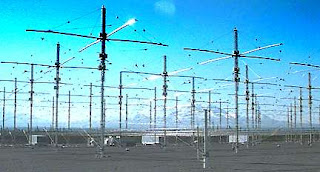 This may seem all fine and dandy but another part of the HAARP project is also to produce ionospheric heating.

If you look it up, you'll find that there are five of these 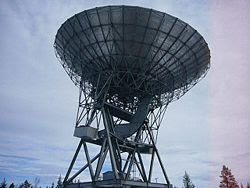 ionospheric heating facilities world wide, and the United States owns three of them.

Wikipedia: An ionospheric heater is an array of antennas which are used for heating the ionosphere, and which can create artificial aurora borealis.

Check out this research paper put out by USAF "Weather as a Force Multiplier: Owning the Weather in 2025", The purpose of this paper was to "outline a strategy for the use of a future weather-modification systems to achieve military objectives rather than to provide a detailed technical road map." 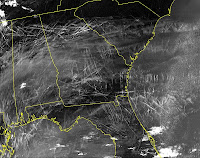 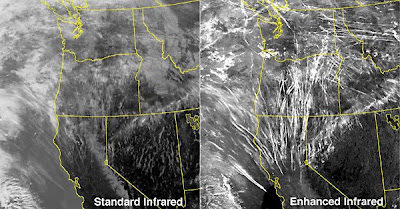 They are heating our atmosphere, and say I our because it is ours. The governments of our world have a bigger plan that most likely doesn't include the best interests of you and

me. What that plan is, is the big question.

So we have these ionosphere heating facilities all over the world heating things up while airplanes are spraying chemicals into the sky. What are these chemicals? That's the other big question. I think that different chemicals are being sprayed and for different reasons.

One is to depopulate the earth directly. What makes me believe this is the fact that there are traces of Ethylene Dibromide in Jet Fuel. Ethylene Dibromide is a known human chemical carcinogen that was removed from unleaded gasoline because of its cancer-causing effects. It has a sweet mild odor and very hard to detect. It's absorbed through the skin and the lungs. Ethylene Dibromide has been linked to heart, liver, kidney, stomach, respiratory system and nervous system damage. It's also a immune suppressive and a lung irritant. By the way, it's found in public drinking water. 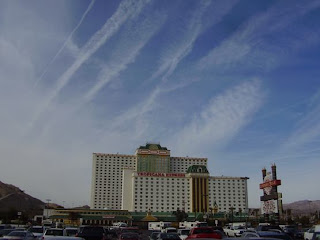 Two, is to support the ionosphere heating process by spraying super charged partials in the air in order the amplify the HAARP projects progress of controlling the weather. You control the weather and you control the planet.

That fact that contrails dissipate in a dry atmosphere should be a direct sign that this is not just ice partials that condense around an aircraft's exhaust. Look at this photo over Las Vegas where it's oh soooo humid.

There is also a phenomenon called "Morgellons Fiber Disease" (which for some reason is denied by the majority of the medical community) and seems to be a direct result of these chemtrails. It seems to effect people in the areas that have the highest density of chemtrails. Not to mention that these areas also have a higher rate of people with respiratory problems and flu like illnesses well after flu session is gone. Such as Las Vegas, just take a look at this.

How could our government do such a thing that's totally against the Constitution? Chapter 32, Section 1520a appears to protect citizens from secret experimentation since it states that citizens must give informed consent for testing. Chapter 32, Section 1515 authorizes suspension of the informed consent requirement "during the period of any national emergency." Well guess what folks, after 911 homeland security put us in a national state of emergency because of "terrorism".

I truly believe there is something going on here. Or are there just thousands of people that are deranged and it's all in their minds. That all the scientific data 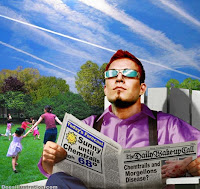