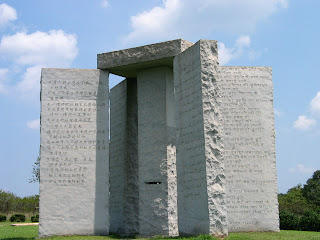 The Georgia Guide stones is a huge monument erected in 1980 located 7.8 miles south of Hartwell Georgia. Some call it the modern day Stone Hinge of the US because of the holes and slots cut out of the rock that align with the sun at particular times such as the winter and summer solstice. It consists of four upright stones 6 feet 6 inches wide, 16 feet 4 inches tall and 1 foot 7 inches thick weighing about 42,437 pounds each.  A center stone with the same height and 1 foot 7 inches square with a cap stone on top of all the stones at 9 feet by 6 feet and 1 foot 7 inches thick. There are also base stones that are 4 feet by 2 feet with the same thickness. The stones are aligned in the directions of east and west in order to align the solstices like a big X. You might by saying to yourself, I've never heard of the Georgia Guide Stones, there not in any travel guides.
The people who built it wish to remain anonymous.  They claim to be a small group of loyal Americans. What's so special about these stones is the massage that's written in English, Spanish, Swahili, Hindi, Hebrew, Arabic, ancient Chinese, and Russian.

IN PERPETUAL BALANCE WITH NATURE

RULE PASSION — FAITH — TRADITION
AND ALL THINGS WITH TEMPERED REASON

PROTECT PEOPLE AND NATIONS
WITH FAIR LAWS AND JUST COURTS

There is also a message on the four vertical surfaces of the capstone. Again in different languages. There is a explanatory tablet near the Guidestones that identifies these languages or scripts as Babylonian Cuneiform, Classical Greek , Sanskrit, and Egyptian Hieroglyphs, representing north, south, east, west and provides an English translation as well, saying

"Let these be Guidestones to an age of reason."

The explanatory tablet says there is a time capsule buried six feet underneath it. It says it's "to be opened on" but give no date. 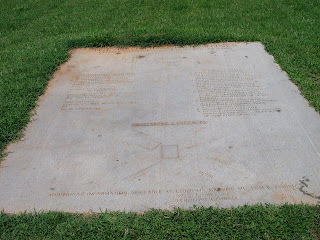 This monument makes sense and I like the message that it brings, but that would also mean depopulation of the earth by about 92%, scary thought. Well, either way it's there for all to see. I think the most important question here is, who are the founders and who are they affiliated with? It's been there for a long time and very few people know about it. Whats the point if your not going to tell anybody. Strange indeed.
Email ThisBlogThis!Share to TwitterShare to FacebookShare to Pinterest
Newer Post Older Post Home