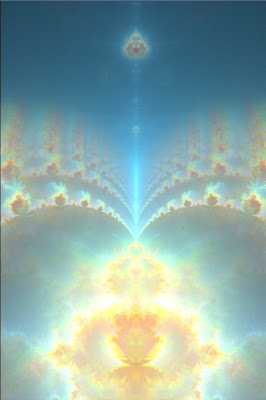 There are plenty of people that feel that a cataclysmic event is going to happen in the year 2012. More precisely, December 12, 2012 at 11:11am, universal time during the Winter Solstice. This, as we all know, is the day the Mayan calender ends their "Great Cycle", not the end of the world. My favorite theory is that we are getting ready to enter a new level of consciousness through an alteration of our DNA. Once our Solar System goes through the galactic equator, or galactic plane, most importantly, during the winter solstice of December 12th 2012.

Our earth will be bombarded gamma-rays and that will literally change our gravity, magnetic poles, and our atmosphere. This means, the air we breath, the water we drink and the food we eat will all change. We'll adapt to these conditions and our bodies will evolve to their new surroundings. I would like to think that the gravity of the planet will be a little less. How amazing that would be. We would have no choice but to think differently, and our minds would be uplifted, literally. I'd like to think that fear will start to leave the minds of people and thoughts of love would fill that space. Imagine a world without fear and we replaced it with love. I'm not talking the rebirth of Jesus either! The son of the almighty, wrathful and jealous God. God and fear go hand in hand!!! But that's another post. Anyhoo, if we did live in a "conscious light of love", we all would understand each other no matter how different we were. There would be a common understanding of what it would take to live harmoniously among one another and our planet. We could control our population, and live in abundance.

There would be no laws because there would be no-one to break them. We would not need money because there would be no corporation to work for. We would no longer be a slave to the clock and calendar. But time as we know it would be when the sun rises and sets, where the stars sit in the sky and what cycle the moon is in. I believe that it's possible to have a world like this; it's not going to happen in 2012 overnight. But more that this is the dawning of a new age, the beginning of the age of light, or the age of love.
Here are a few other perspectives from around the world.

-According to the ancient Egyptians, the Great Pyramid’s present time cycle ends in year 2012 AD and starts as the "Place of Purification".

- Mayans Call it the end of the "Great Cycle".

- Among the Incas it was translated as the “Age of Meeting Ourselves Again”.

-The Zulu Believe that the polar fields will shift, “The Earth will be turned upside-down”.

- The Tibetan teachings of Kalachakra are prophesies foreseen by the great Buddha. His predictions included the “Coming of the Golden Age” happening in 2012.

-The Hindus Kali Yuga believe in the up-coming of Kalki and the critical mass of the Enlightened Ones.

-The Maoris people believe that there will be a merging of the spiritual and physical worlds.

-The Dogon people believe that the spaceship visitors, called the “Nommo” will return taking on the form of a blue star.

-The Hopi’s Predict a 25 year purification preceded by the end of the Fourth World and the start of the Fifth.

-To Pueblo Indians know this to be the time of the “Fifth World”
The Cherokee’s ancient calendar ends the same day as the Mayan calendar.

Either way 2012 has major significance to the human race, no matter how you look at it. We are all in control of our own destiny. Our world is your perception. Think about it