Did you know that most of the world is infected with Nuclear Fallout.  Nobody asked your permission.  The governments of the world do what they want without considering the consequences that their tests could have on the entire planet.   Nuclear fallout has saturated in the soil from all of the nuclear tests conducted since 1945 to the present date.  From 1945 to 1998 the world has been nuked over 2000 times.

This visual will show you where and when and by whom these nuclear test were conducted by.

Here's the thing, nuclear fallout just doesn't disappear. It's still there and if you were born in the northern hemisphere any time from 1960 to 1975 your genes most likely have some type of mutation from nuclear fallout.  It's also being linked to Autism.

Nuclear fallout could be the cause of many of the health issue's that have occurred over the last 50 years.  Could it be that they knew about these issues the entire time and just said "well, that only means more money for pharmaceuticals and easy population control."   Do you think this could also be the reason for the cheap real-estate in Nevada?  It's interesting the fact that there are very few real nuclear fallout maps, and why do you think that is?  Well because if population actually knew how much fallout there is and how many people have been effected.  The trust in that the government has the peoples best interest in mind would completely diminish.  Many people don't trust the government anyway but the outcome of people knowing the real knowledge about nuclear fallout and the implications it carries could very well change the way we think about government all together.  The US government went after Saddam Hussein and one of the excuses was because he poisoned and killed many of his own people.  Well, who's to say how many people have suffered  or even died because of nuclear fallout caused by the US government.  What about all of the mutated genes that have caused diseases? 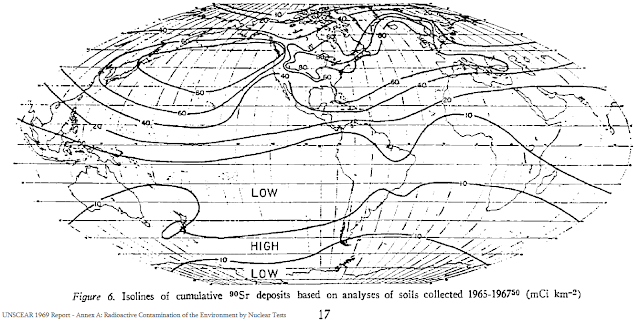 This is apparently one of the few accurate fallout maps.  The world has already experienced a small nuclear war that the governments  from all over has declared on earth.  But most importantly this isn't on old topic, and in all actuality the world is facing new nuclear fallout happening as we speak.

What you're looking at is a chart that measures any amount of gamma radiation in the air.  Russia is right now experiencing a mass amount of wildfires and since July more than 10,000 acres have been burned.   Here is a map of the fires and the contaminated soil. 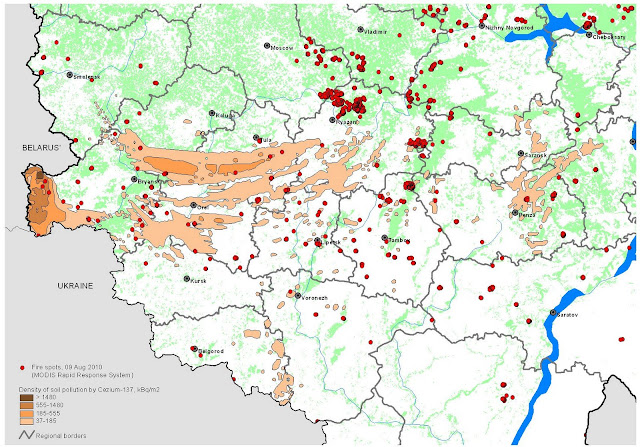 "There is a higher threat of cancers and future mutations, especially for children."

“I think Russian authorities must accept responsibility for radioactive dangers instead of keeping silence about it.  They should tell (…) that there is likely a problem with radiation and suggest methods of protection.  And of course, it's important to determine now where radiation is being re-distributed by wind.”

"Over the past two weeks, a Chernobyl Reloaded has been in the making, thanks to wildfires that are breaking out in parts of Russia that received some of the greatest deposition levels from Chernobyl fallout.  Long-lived radioactive isotopes, such as Cesium-137 and Strontium-90, which are deposited from fallout events such as nuclear weapons tests and large-scale radiological accidents, tend to reside in the top few inches of the soil and also become lodged in vegetation and dead biomass.  Hot burning wildfires - such as a record-breaking, large wildfire in 2007 that lifted legacy fallout radiation north of Milford, Utah - can suspend back into the air up to 100% of this lingering radioactivity where winds can carry these carcinogens.

How far can the winds carry this stuff?  Thousands of miles.  This was confirmed in 2006 when an international team of scientists discovered that forest fires are capable of re-suspending radioactive fallout debris over great distances.  They found that nuclear testing fallout found in the soils of Canada was 'still being redistributed far and wide by forest fires' and this fallout was 'subsequently transported across great distances.'  The hard-hit fallout areas of Chernobyl are virtually no different in character than lingering nuclear testing fallout in North America's soils.  The problem is the concentration of radiation is thousands of times higher.  On August 11, 2010, Professor Edmund Lengfelder who is chairman of the German Society for Radiation Protection said in a public radio interview in Germany that 'the chance of radioactive particles entering the atmosphere was "very large" and that these could travel up to thousands of kilometers depending on wind conditions.'  Lengfelder commented that "Nobody can be sure about the distance these particles could travel in the wind." ('Russian fires hit Chernobyl-affected areas, threatening re-contamination,' Deutsche Welle, 8/11/2010)"

The health danger?  A 1996 scientific study noted that during wildfires in radioactively contaminated areas, 'If the elements were radioactive isotopes, such as I-129, Cs-137 and Cl-36, fires could cause an increased radiological dose to people through inhalation, exposure to ash, or ingestion of plants because of increased uptake of ash leachate.'
source

Here's the scariest part of all, once nuclear fallout is in the air it travels long distances then eventually falls to the ground.  But where nobody really knows, or if they do their just not telling anyone.  What would you do if you found out that someone in your family died due to cancer  they got from the nuclear fallout when the US government was intentionally exploding nuclear bombs above ground.  This fallout gets into the soil then gets into the grains which humans and animals eat such as cow's which in turn get's into the meat and in the milk.  One thing I find interesting is the state I live in, Utah.  Utah has one of the worlds best if not the best cancer facility in the world and the cancer rate here is extremely high.  It reminds me of something my father-in-law said "I'm gonna get cancer, your gonna get cancer, it's just the world we live in, were all gonna get it." he has also lived in Utah his entire life.  Utah also is at one of the highest risk states for fallout contamination.  Were right next door to Nevada where all the major nuclear testing is done. 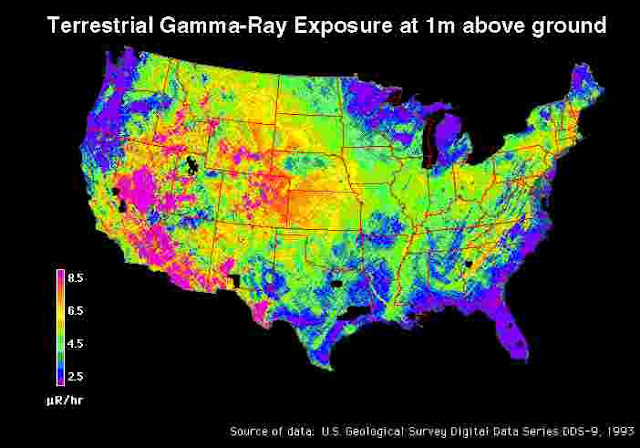 The fact I live here, it scares my a bit thinking about this is were my daughter was born and has been raised for the last 2 1/2 years.  It's also a bit scary to know that it's very likely I may have a mutated gene or two because I was born in the early 70's.  It's funny how the US government can decide what safe levels of nuclear fallout in the air and soil can be.  Yea...like none. There no such thing as safe nuclear fallout.  It's everywhere and there's nothing any of us can do about it except move to an area with less fallout.  What a world we live on.  Learn about where you live and how much fallout is in the soil, realize the world as it really is and  attain your attainable mind.