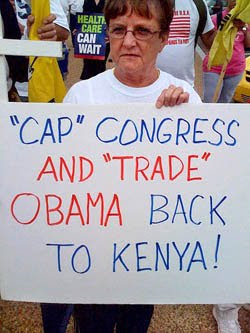 I'm completely baffled at these Tea Party activist.  I would say that these people have to simply be some of the stupidest people on the planet.  None of them seem to realize that it was the republicans that have taken our rights away one by one.

9/11 was clearly an inside job done by Bush and his cronies (all elite rich white republicans), which in turn has led to Homeland Security which has taken away most of your constitutional rights already, mainly the forth amendment.

Tea Party followers think they are standing up for their American rights and fighting to up-hold the constitution and bla bla bla. 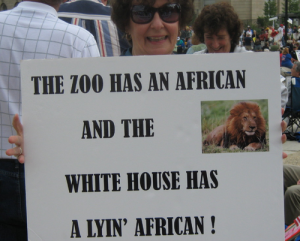 No taxes.  What kind of world do you think we live in?

Let me ask, do you like the nice paved roads we have here in America?

Do you like having your trash picked up from the front of your house?

How about getting something as simple as your US mail?

Granted America isn't the safest place in the world, but imagine an America without any police.  I think the Tea Party would like that.

"Well.... if we had no cops then everyone could own guns and we could protect ourselves."

"We don't need government, all we need are guns and the Lord God Almighty Jesus to make the decisions for us." 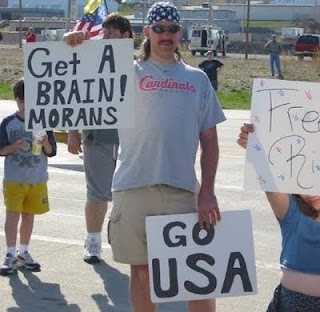 How F$#KING selfish are you people????

"This is America and I have the constitutional right to bla bla bla, and I should have the right to say if I want health care or not"

If that's your attitude, then move to Africa where people die every minute due to the lack of health care.  This way you can get a taste of what life is like around the rest of the world, then maybe you wouldn't be so goddamn selfish.

How can so many people be so upset about 45 million people getting health care?  Health Care is a good thing you ignoramuses.  You really think that the Lord God Almighty Jesus is going to save you when you get really sick? 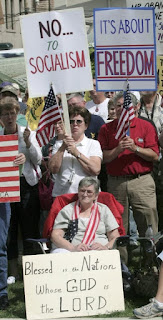 Wow!!!.... Now those who are sick and can't afford Health Care can finally get some.

Do you people just not give a rat's ass about the infrastructure of the well being of Americans.  It sounds like you only care about yourselves.

Tea Party people are the type who have never left their home town and have never been to a different country except maybe Mexico or Canada.  These people seem to be very sheltered from the rest of the world and they like it that way.  Ignorance, for them, is bliss.

That brings me to their favorite TV station, FOX News.  OMG, could you be any more brainwashed!!!!  These people seem to believe that FOX News is the only place to get news and  information when in fact the information that their getting is being filtered through conservative rich white republicans that feed on ignorant people in order to manipulate them into becoming Tea Party Activist.

Don't you see that the republican conservatives are all about huge companies employing Americans to keep them quite, ignorant and servant.  While the few elite make millions off your hard work. 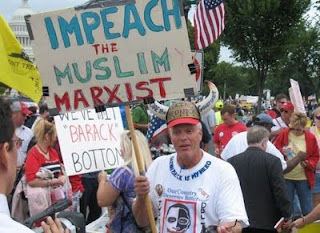 Then all of a sudden something goes wrong, you're fired with no remorse and the company needs billions of dollars from the government to bail them out while the elites go on vacation.  Yes Obama signed the Bailout, but that Bailout was set up by Bush!!!  The bailout happened because of conservative rich white republicans finding more ways to scam America.

They say no taxes, well the taxes you're paying towards the bailout are going to towards companies ran by conservative republicans.

What the uneducated Tea Party doesn't realize is the fact that they are what's wrong with America.  People thinking that they deserve everything without giving anything.  Sick! 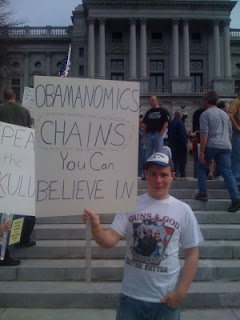 These are the poster children for the elite making it look like "real" Americans want their country being ran by a few extremely rich white men.  What these people don't realize is that they're the puppets.  They are so brainwashed that some of them have the attitude that they rather die a sick agonizing death knowing they had a choice to opt out of health care rather than to be cured.

Not only does this bill provide health care to millions of people who didn't have it in the past, but this bill will also free up our emergency clinics to people that have real emergency rather than people who just don't have insurance. 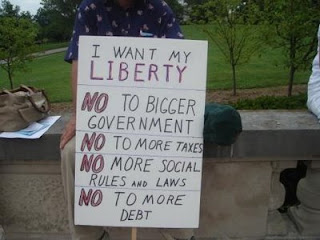 If you're a part of the Tea Party, you most likely are not very wealthy, which makes heath care an issue for you because it's too expensive and that's why you don't have any.   Well now you can finally get affordable heath care and guess who you're going to be thanking once you see that bill from the hospital or doctors office.

Now if you're sitting there saying,  I don't go to the doctor, nor do I get sick.  Maybe not, and good for you, but you will someday.  We live in a country with over 302,000,000 people and we all have to live together.  I like good roads, national parks, US mail, garbage pick up, and all the other things that make us a first world country.   I've lived in a third world country, I know the differences. There are a few tax free countries like Kuwait and Bharain, see what life is like out there if you hate the way things are here.

Did you know that the most advanced countries socially are countries with socialist values?

Many countries have many socialist values where every citizen has a right to free education and health care.  But of course we would never want that for America, it's socialist.  If we were a socialist country it would be a country run by the people, rather than a few elite rich people.   Poverty would be a thing of the past and all would be provided for.  What the hell are people so scared of?  I'll tell you, it's these rich elite who are scared. Scared they're going to lose their power. This is who is pulling the strings at Fox News manipulating uneducated rednecks to do their bidding.

How can someone not clearly see how screwed up a capitalist society is, is beyond me.  .01 percent make all the money while the rest of us get distracted with visions of fame, wealth and violence.


My question is, where were these people when Bush took away our fourth amendment right?

Then you have republican politicians condoning this kind of behavior.  It amazes me how adults can act like this.

"Get your guns and your bibles because were hunting for liberals"

The more educated we get as a country the harder it becomes to be taken advantage of by these elite.  The Tea Party is comprised of uneducated blue collar people who believe everything they hear on fox news.  These are the same people who are fans of the biggest disgrace to politics in history, Sara Palin.  Who jumped the  Canadian border  to receive health care.  What does that say?